Congratulations To Our Team

Green-fingered staff and management at The Park in Mawgan Porth, Cornwall, have been praised by botanist David Bellamy after they helped secure it a major environmental accolade. 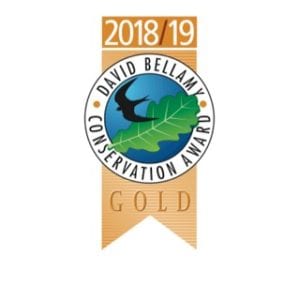 Professor Bellamy described the team as “true friends of the countryside” after naming The Park this autumn as winners of the David Bellamy Conservation Award at its top gold level.

A long list of green initiatives at The Park resulted in its being selected for David Bellamy’s annual awards which recognise the achievements of businesses championing sustainable tourism.

Led by grounds manager Mark Jackson, the park has planted thousands of high nectar-bearing flowers which provide vital foraging for honey bees, butterflies and other pollinators.

It also maintains eight bee hives, and has sited many bird, owl and bat boxes in the 27-acre grounds as well as a hedgehog hotel and refuges for beneficial insects.

David Bellamy praised the park’s ban on single-use plastics in its restaurant where locally sourced ingredients are a speciality, helping to reduce the food miles of its dishes.

Body boards plus buckets and spades left by visitors are recycled for the use of other guests – and shielded illumination reduces light pollution and helps families to enjoy the night sky.

Guests can also enjoy freshly-laid eggs from The Park’s hens in return for a donation to Surfers Against Sewage which the business supports.

The Park is just a short stroll from the sandy beach at Mawgan Porth, and guests are able to stay in a range of accommodation from yurts and cottages to luxury lodges and cabins.

Many of the holiday homes feature wood-burning stoves fuelled by locally extracted timber.

According to Mark, staff share an enthusiasm for helping to ensure the park is run as far as possible along sustainable lines, and in helping to safeguard its abundant flora and fauna:

“Most of us here are from this part of Cornwall, and are keen to ensure that The Park is a match to the stunning natural environment in which we live and work,” he said.

“We also believe it’s also important to get our messages across to children, which is why we organise events such as wildlife safaris and beach clean-ups in which youngsters get involved.

“It’s fantastic to receive this award and the commendations from David Bellamy, and to know that he is giving his full support to our care for the natural world,” added Mark.

There is more information about The Park, which has a top five-star rating from VisitEngland, on its website at www.theparkcornwall.com